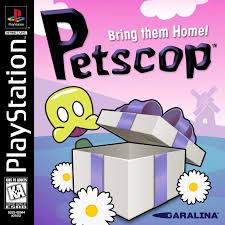 Today I’m going to be discussing a very interesting creation I came across a few months back. While 6 hours into a youtube deep-dive, I came across a let’s play for a game I had never heard of before. While the Youtube video seemed to mimic that of a normal lets play video, I became increasingly intrigued with the odd occurrences sprinkled throughout the next 9 minutes of my life.

The game was called Petscop, and early Playstation 1 game created by Garalina productions in late 1997. The game centres around an unknown protagonist, named Paul by the let’s-player, as he explores the gift-plane, attempting to capture Pokemon-esque creatures through solving various puzzles. Its bubbly aesthetic mixed with the monotone music to create a relaxed, if not eerie tone. This feeling of uneasiness was only accentuated by the seemingly unfinished environments within the game. Towards the end of the video, the game takes an extreme tonal shift. The game becomes incredibly dark, which heavily contrasts the lighthearted atmosphere a few minutes prior.

When the video abruptly ended, my curiosity peaked. I decided I had to buy this game. I couldn’t wait for the next video instalment. Instead, I would explore the game for myself, and uncover the mysteries behind it. However, as I proceeded to google the game, I made the most peculiar discovery. Petscop didn’t exist. There was no real Petscop game created for the Playstation, and there was no Garalina productions.

The only evidence that supported the game not being a figment of my imagination was the youtube video I had just watched, and a lot of people sharing their experiences with it, which were very similar to mine.While the lore behind Petscop is incredibly interesting, and I would suggest you check it out for yourself (lord knows there are thousands of videos about it), I wanted to discuss Petscop’s as a whole, and its place in the universe. So, this video was created to discuss 3 lingering questions about this piece.

Keep in mind that Petscop is an incredibly unique creation, one with various qualities that need to be considered. Also, remember that this is a creation on youtube, which, aside from let’s plays, is not considered a platform to create games on. With that being said, lets explore Petscop.

In order to determine whether Petscop is a game, first we have to identify the attributes of a game. Today, and for the sake of simplicity, I’ll be focusing on two points that I believe are fundamental in defining anything as a game, whether in the form of virtual, board, or anything else.

There are other attributes we could add, like competitive play, challenges for the player to overcome or immersive story experiences. But as the game medium is dense with platform-challenging games that won’t necessarily meet these criteria, these attributes are exempt from our definition of games at its most simple form. Now, lets see whether Petscop meets the criteria proposed.

In regards to amusement, Petscop obviously meets this criteria. A player voluntarily clicks on the Petscop youtube channel with the intent on enjoying it in some capacity. This enjoyment may take the form of intrigue, interest, horror or shock, However, almost every recreational activity is done for one’s amusement, so this is not sufficient in order to classify as game.

The second trait and the more important of the two is player interactivity. This element is what sets apart games from all other mediums, and why we have such a strong emotional connection to them. In other mediums we can empathise with characters, and watch them journey from point A to B. However, in games we ARE the character. And while some games do have a linear goal, meaning we must move from point A to B, what we do in-between is completely up to us.

While the reasoning may be abstract, Petscop does fulfil this criteria quite easily also. What makes Petscop’s interactivity hard to comprehend is the fact that it’s created in a medium which seems to have no interactivity. A youtube video is a video, a pre-scripted creation with no player involvement whatsoever. This cannot compare to a video game console with its limitless controller options, or a board game with a variety of manoeuvres to master. Well, that isn’t necessarily the case. Youtube allows you to interact with Petscop using its own player driven settings. This includes liking the game, commenting, and subscribing to the developers. While we never stated that a community is necessary for a game to be a game, Petscop does have a die-hard community, breaking down each second of each instalment to decipher the hidden meaning behind this creation. Petscop has almost 200,000 subscribers, and its subreddit has almost 20,000 members.

Now it seems easy to reject this premise, citing that this type of interaction is not sufficient in meeting out established criteria. However, I would not blame the creation itself. Instead, it seems to be a platform limitation, which, to some, may suggest that games should no be created as a “youtube video”. While that may be the case, Petscop still seems, in essence, to satisfy both criteria.

Despite being classified as a “video” on its platform, Petscop’s classification as a video game is highly contested. This is due to the medium it has been created in, with no firsthand interaction with any of the characters in the game. The definition of a video game we’re going to be using is something played by electronically by manipulating images produced by a program. Though it does emulate a video game experience, Petscop doesn’t seem to meet this definition. Those who access the game via youtube do not have the same experience as, say the let’s player in the video. Which brings us to another interesting question; while we may not classify Petscop as a video game due to the way we experience it, would the narrator? If he is actually playing Petscop in the traditional video game sense, than this piece meets the definition of playing a video game, to him at least. And as long as one player experiences Petscop in this sense, isn’t that enough to consider it a video game? As we have no idea if Petscop is actually “played” by the narrator, we cannot make this assumption. Plus, we still want to understand what it means when we experience Petscop through youtube.

Due to this discrepancy, Petscop has been likened to many other forms of storytelling, two of which I’ll briefly cover in this video. Firstly, Petscop, is often compared to Creepy-pasta games, primarily due to its creepy themes. In general, Creepypastas are defined as horror-related stories that have been written and circulated around the internet. These stories can take the form of written pieces, images, and sometimes videos. In recent years, there has been a spike in video game related creepypasta being adapted into youtube videos, the most well known being sonic.exe and Pokemon black. Petscop is also compared to creepy-pasta stories due to the similar motifs and structure they both share. In particular, both start with seemingly normal games that descend into darker themes, the explanation usually being haunted cartridges. Petscop definitely has identifiable similarities with that of a creepypasta. But what makes it unique is that creepy pasta primarily rely on well known video games series in order to gain notoriety. A story becomes twice as intriguing when it mentions a character like Sonic, a household name for many growing up. It’s the same as the youtube series “Marbled hornets”, whose notoriety comes from its re-imagining of the Slender man game. However, Petscop is an entirely new IP, with no connection to any other games. It was just posted on Youtube, and it popularity came from its content, and in some instances, lack thereof. Further, its become a long running series, with over 12 entries, making more of a series than one isolated story. These difference may suggest that Petscop transcends the concept of a creepy-pasta, or just borrows aspects of it while creating a new medium.

Another term that has been used to describe Petscop is an ARG, or alternate reality game.

An alternate reality game is an interactive narrative that uses the real world as a platform, employing transmedia storytelling to deliver immersive stories. While ARGs generally use the internet as a central binding medium, they are not played exclusively on a computer and usually do not require the use of special software. It’s shaped by characters that are actively controlled by the game’s designers.

Petscop does indeed have aspects of an ARG. It’s binding medium is the internet, specifically youtube, while simultaneously linking to other mediums such as the aforementioned creepy pastas and video games. As we don’t know how the narrator interacts with Petscop, it could also be argued that the characters within it are played by him instead of AI. However, the ARG form is defined by intense player involvement with a story that takes place in real time, evolving in accordance with player responses. These are elements left out of petscop, as its player interaction is incredibly limited, which may suggest it should be exempt from the ARG label. However, if could be argued that the Petscop story does evolve based on player decisions, but it’s more perceptual than physical. Thousands of players posting and sharing their ideas about the content within the game may result in an overall change in how we interpret the piece, which may be an even more powerful adaptation.

Petscop seems to combine multiple elements from multiple mediums, which may be a reason for its success. A reliance on one given set of characteristics or structure lead to familiarity, repetitiveness, and eventually boredom. What makes Petscop so hard to define, ultimately, seem to be its greatest asset.

The results of this video lead to several interesting implications about Petscop, and games as a whole. For one, will eager gamers of the next generation get to see these cross-platform creations shown off at E3? How do we define a successful game on the youtube platform? Do we consider one view to equal one copy sold, or one like? If the former, than the first instalment of Petscop is set to become a platinum selling game, with almost 1 million views. This means it has outsold, or has been experienced by more people than Jet-Set Radio, Okami, Enslaved and Bravely Default in their original mediums. While this doesn’t seem a fair comparison, as Petscop can be viewed for free, while these games require payment, it’s an interesting comparison to make nonetheless. Further, will these games be acknowledged by the wider gaming community? Will their achievements be celebrated, or ignored by those in protest of its supposed false identity? Could games like Petscop be considered a ‘must have’ title? Something that could win awards, and be compared to the likes of Five Nights at Freddy’s or even Cluedo?

In conclusion, I’m convinced that Petscop is a game. What type of game, I’m still unsure of. But what I do know is that it’s a pioneer of a new and often rejected form of game creation that’ll hopefully expand in the future. While some may think this over-saturates the game market, or even strays too far from its original roots, I’m excited to see where these types of pieces take us. I, for one, am eagerly awaiting the future.