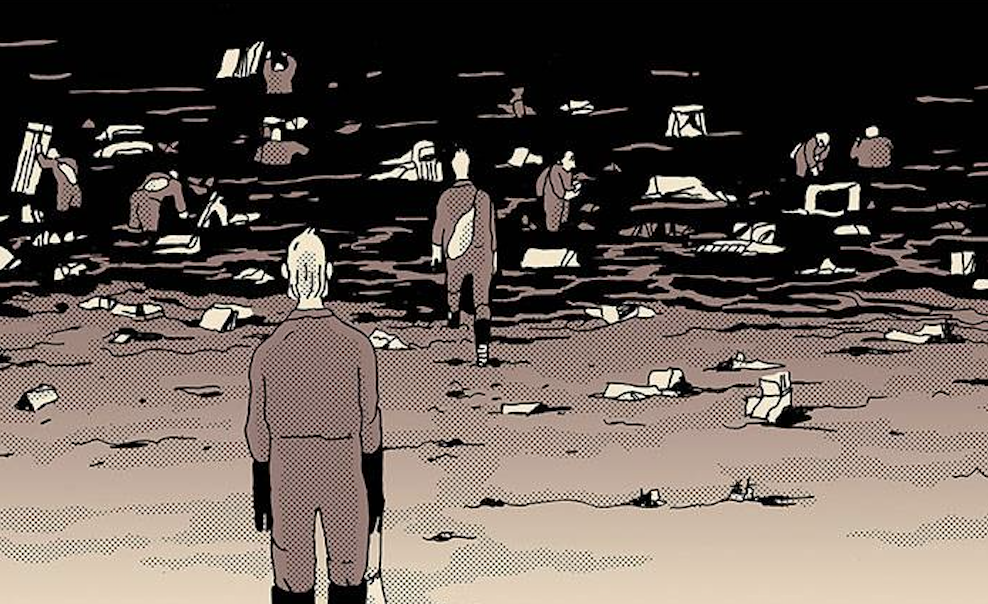 It’s very rare that I look back at previously-reviewed works for a retrospective view, yet, here I am with Below-Earth once again. I’m sure Chris Gooch would agree his piece has come a long way from sketches on Instagram to a 500+ page tome published under Top Shelf Productions. Re-reading a work gives great insight into the longevity of ideas, and much of Below-Earth remains pungent in its discomforting qualities, maybe even more so in a climate of biological imprisonment.

For those who haven’t read my initial review of the comic, Below-Earth is a gritty dystopian piece centering around an archaic prison system in which criminals are thrown into a giant hole 600 metres underground. There, they must rebuild some semblance of a life, wading through a complex and highly exploitative environment.

We are introduced to this system through Reece Dixon, a new prisoner who we watch descend under Earth. Together, we learn the ins and outs of the prison system; navigating an inherently predatory labour camp while assimilating into the social systems at play. We also follow Elle and Zoe, long-time patrons who try their best to escape.

Much of what I said in my first read still stands. The piece does its best to insert stakes into each moment, leaving very little time to stop and catch your breath. Survival is something that cannot be assumed, with almost no characters being reliable or empathetic. The gritty tale is manifested through decaying settings and unhinged characterisation, with Gooch melting society into dense, ugly scapes.

The futility of existence is understood but never explicitly stated, as prisoners must further some form of goal in order to continue. Morality is rescinded, and success is measured by bellies full of indescribable slop.

One aspect that became more apparent during my second read was that, even in an immoral hell-scape, where the most antisocial members of society dwelt, a reliance on conventional institutional structures was essential. Without even realising, they clung onto the very system that facilitated their imprisonment. The wealthy lived in the carcass of a rotting hotel, and technology was still an incredibly valuable commodity.

Inconsequential items that now held purpose, like goggles, were re-evaluated, but the jail system could only be sustainable if the prisoners adopted the capitalist mindset synonymous with modernity. Maybe the impossibility of escape unconsciously settled over the characters, making an imitation of society a comforting quality. Either way, Gooch did an excellent job of incorporating staples of society, ones we forget exist, into his setting, as pillars of Dixon’s existence.

Flicking between core colours was an example of an unconscious change in mood, and the dulled pigments were subtle enough where you could almost forget they were present. But they added much to the ambiance – Reece’s trudging through the slums in grey, the girls’ high-stakes escapades in yellow.

I’ve become so familiar with Gooch’s work that his style has almost become comforting for me. Once again, I must commend him for his interesting ideas, characters and attention to detail. Under-Earth is still a tale of human survival, and resilience in the face of adversity, something we all might appreciate a bit more in these complex times.

This product was provided to the reviewer in the form of a review copy. The article remains completely unbiased, and contains the reviewer’s thoughts only.