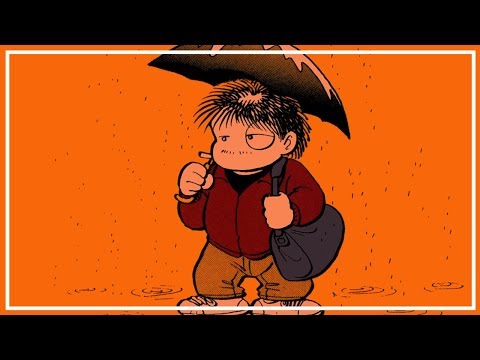 Story and art by Hideo Azuma

Synopsis: This autobiographical piece documents the numerous “disappearances” of alternative manga author Hideo Azuma, who, unable to cope with the pressures of a lifestyle afforded by his occupation, abandons his work and family to travel around Japan.

I appreciated that, even when using humour to mitigate the magnitude of his decisions, Azuma never attempts to romanticise his journey. He never tries play it off like he enjoyed his time on the road, nor that he acted in any heroic fashion. It was a saddening situation where Azuma HAD to discard his life in order to alleviate his suffering, even if that meant sacrificing many resources and relationships we take for granted. His actions are never justified, but emphasise the pressures of daily living. At the beginning of the piece, he reaches out to the reader, telling us;

“This manga has a positive outlook on life, and so it has been made with as much realism removed as possible”

But very early on, it’s clear that his piece is very much chained to reality. It’s very literal in its portrayal of living, and the only sources of comedy are from Azuma’s art style (cute caricatures with endearing facial expressions), or his failure to ascribe direness to his situation. As a result, Azuma’s piece flows like an itinerary of his adventures, devoid of any form of reflection or significance. And even when describing his daily routine, I wasn’t particularly intrigued. The second half transitions into more insightful descriptions into Azuma, widely regarded as the inventor of “lolicon” and his struggles, but the slow start impeded on their severity. This speaks to the different life periods of Azuma, which are split into four parts within this collection;

“Walking at night”, set in 1989, documents Azuma’s first disappearance, walking out on his work and wife to live the life of a vagrant. Living behind an apartment complex, this section is primarily concerned with exploring the author’s diet (garbage hopping), and methods to avoid detection by others around him. This lasts a week, until he is caught loitering in the middle of the night by a police officer, who, suspecting him to be a criminal, takes him back the station. When his identity is revealed, he is returned home. While thrusting the reader straight into Azuma’s journey seems like a good idea, its inconsistent storytelling just left me confused. There is nothing to really take away from this part on its own. We’re given no reasons as to how Azuma finds himself there, nor his thoughts on the situation. His indifference to his situation is meant to create an element of comedy, or at least mitigate his depressing situation, but there was no characterisation to assist the reader in deducing their protagonist’s personality. By making a huge chunk of this section focus on his diet, it feels like the author really doesn’t have much to say about his time running away, and instead can only write about food. This was by far the weakest segment of the piece.

“Walking around town” set in 1992, has similar beginnings, however documents and extended period of Azuma absence. Interestingly, during this time the author gets a job at a construction company, laying pipes, and instead of focusing on food, there is a nice balance between descriptions of his work life and the characters that surround it. As Azuma rarely reflects on himself, it was refreshing having characters with actual personalities we could gauge and read around. And, while he never goes into detail about it, it was interesting watching Azuma reinvent himself instead of spending months-to-years living off of garbage scraps. The fact that he seemed to find some happiness from the life of a labourer, more so than a manga artist, leads to several questions about the pressures of a mangaka, and the ideal way in which we should live.

This is further explored in the third section, set during the 1970s/80s where we explore Azuma’s career leading up to his disappearances, documenting a gradual build-up in unhappiness. The causality ascribed to the pressures of work and his vagrant lifestyle was the only form of satisfaction I got from Disappearance Diary’s story. We were finally provided with some insight into our character’s motivation, his life and his thoughts regarding his deepening unhappiness. The reader is also treated to some information about the manga industry, and how its functioning (potentially) comes at the expense of the creators it relies so heavily on. The only thing lacking from this segment was the inclusion of Azuma’s family. We only see his wife briefly, acting as his assistant during the scenes where he is creating manga, but we are never given her perspective on her husband’s actions. It would have been fascinating to hear from her perspective about her husband’s absence, and why she ultimately stayed with him afterwards. It felt like the author wanted this piece to focus on his journey alone, but not providing any reflection left the story contention-less. In saying that, it did reinforce the idea that all the responsibility for his actions fell on his shoulders, which I respect.

The final section of this piece (set in 1998) documents Azuma’s attempts at returning to normal life after trying to escape it, and his gradual descent into alcoholism. This was, in my opinion, the strongest section in the piece. There is no awkward power struggle between the inherent seriousness of the story and the cartoonish hue that shrouds this work in. He allows his experiences to play out organically, and in that sense creates an immersive experience for the reader. That, combined with his observations on the characters who inhabited the rehabilitation clinic often incited actual feelings from me; pity, sympathy, endearment. It’s an honest depiction of a very raw moment in one’s life, and it was structurally excellent. However, even in the final panel, it feels like Azuma hasn’t learned anything from his decades of struggle, brushing off every opportunity he has to reflect, leaving the reader with nothing to hold onto as they close the book.

Ultimately, what frustrated me with this piece was its utter lack of introspection. While the author never advertised it as a particularly reflective piece, when you abandon your life multiple times, travel across the country (half the time homeless and half the time doing odd jobs), and battle alcoholism to the point where you are institutionalised, surely you’d have something of value to say based on your experiences.The art was cute and did humanise his experiences through endearing portrayals, but I felt no connection to him as a person until halfway through the piece. While starting the piece at his homeless stage would be punchy if he didn’t cling to an indifferent/uninterested narration style, the attempts at comedy muddied the water even further, and the reader is left clueless as to the story’s point. The later segments of the piece redeem the slow start, but the chunks that were awkwardly told created inconsistency in how I viewed the text. There was a genuinely intriguing experience to explore here, but Azuma missed the mark on multiple occasions, and while it was admirable to try and entwine such direness with comedy, it hindered the piece from its inception.