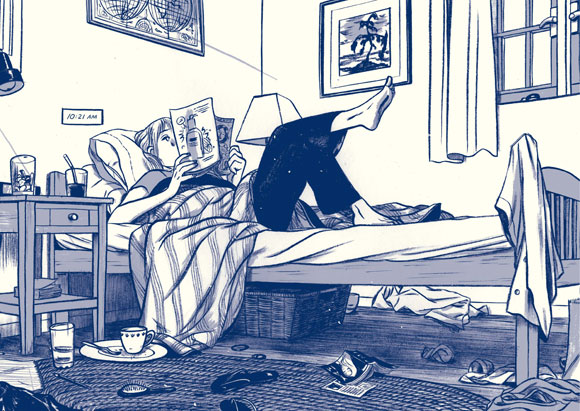 This One Summer Review

I don’t really like “reviewing” pieces like this, because sometimes I worry that I will miss important aspects of it based on my own personal dispositions. It feels almost facetious discussing topics I can only sympathise with, but I’ll try my best to discuss what I myself may never have to experience. This One Summer is a macabre coming of age story about a young girl on the cusp of adulthood. At a stage where childhood is no longer an enveloping ignorance, though adult issues still feel far off, we wade through the murky water of gender roles and societal expectations. Exceptional artistry compensates for a somewhat lacking sense of storytelling, though almost all elements for a good read are present.

This graphic novel follows Rose, a preteen returning to her holiday home in Agawo Ontario, Canada. Her family comes up for the summer every year, and in that time she has met and befriended fellow vacationer Windy. Their time is spent swimming, exploring nature, and basking in the ultimate freedom summer offers youth. On this trip, however, maturation has allowed Rose to acknowledge adult dramas around her, most of which she meets with disgust. Her frustration with reality is only heightened when such issues begin affecting her family in ways she still cannot comprehend.

This piece highlights an important intersection in womanhood, where perceptions of themselves and the world’s perception of their gender begin to conflict. Watching Rose struggling to grasp idealised female forms, and avoid being a ‘slut’ is highly confronting, but something I feel would resonate with many younger women. It sounds so awkward when Rose uses such sexist vernacular, but that’s exactly what it is; a young girl struggling to understand what the world expects of her, with no idea what these terms truly mean nor when to use them. There are a lot of harmful perceptions of women in this piece, but the point of it is to show how these behaviours are absorbed into the minds of children, and only with maturation do they begin to understand the implications of slut shaming and sexism. The authors stress that this journey is something Rose goes on her own. Windy, a year and a half younger, intends to spend her vacation eating, swimming and dancing, while all the adults speak only cryptically of their developments. Ironically, it is only through the crudeness of the teenagers does Rose find a starting point for her adolescent journey. Unfortunately, a rural town does not necessarily hold the most progressive values.

In a similar sense, this comic is one large observation. Rarely do our protagonists partake in any of the action, rather watching scenes and using their limited cognition to make childish, but often accurate deductions. In contrast to most pieces depicting a yearly summer vacation, it relies very little on nostalgia or romanticism when wading through the last leg of summer. Rarely are flashbacks positive, and even when they are, the overarching melancholy sucks the emotion out of most scenes. This is where the observation style of storytelling begins to hinder the piece. If the story doesn’t have any plot to keep me engaged, and it doesn’t rely on previous adventures to keep me engaged, than what does? The short answer is nothing… really. I enjoyed how consumed the girls became with the affairs of the older convenience store worker. It was a really interesting to see how, when most of our entertainment is stripped away from us, much like on holiday, we become obsessed with the smallest things, whether it’s a book or domestic dramas. But again, this wasn’t enough to satisfy my hunger for story, and a book full of only mundanities did not leave me truly invested. That’s not say it was lacking drama. There was enough “gossip” storytelling, but I just needed a chain of actual story linking everything together, and making the characters relevant, as opposed to “this girl is pregnant” or this “this guy is a heartbreaker”.

Jillian Tamaki’s art was breathtaking, and the use of blue and purple added a natural element into the illustrations. These are colours associated with summer, associated with the beach and the starry evenings we experience on our holidays, evoking a surrealist tinge within the panels. The actual content itself was excellent also, capturing emotive language while still being able to portray abstract scenes if wanted (to great success). If anything, this piece is worth a flick through just for the visual experience. The art, unfortunately, could not compensate for certain writing decisions. For example, including the word “like” within sentences became frustrating, and definitely not an indication of contemporary lingo. These types of utterances in language are used to pause dialogue when one is trying figure out what they want to say. In a graphic novel, it just breaks up dialogue, and removing it makes the story less jarring. It seems like an almost lazy time stamp, when really the writing without it was fine in both content and indicating a period of time.

This One Summer is a satisfying read on the transitional period of a frustrated young preteen. The way in which our protagonists absorb and apply the things they hear and see feels authentic, and similarly the way childhood naivety clashes with the complex hypocrisy of society. Unfortunately, a loose form of storytelling made this piece at times uninteresting, and others feel like nothing more than gossip. Stunning art often soothed my worries, but the illustrations having to assume this role was a disappointing discovery.