Story and art by Isutoshi

I’m not a big fan of the term “guilty pleasure”. I think that if you’ve had a positive experience with a piece, even if it possesses weaker qualities or lacks social praise, there should be no reason for you to stop enjoying. It was only after reflecting on my relationship with Aiki, however, where I began wondering whether the term was a fitting description. To be honest, this manga can be an absolute mess. Its story can be bland and often skewed by perversion. Its characters are both empowering and objectifying simultaneously. The art is nowhere good enough to justify any of this. And yet, I had such good time with this manga.

When researching this manga, there was one point brought up that I wholeheartedly agree with. If you like the main character, you’ll like the manga. If you don’t, then this will be a very painful read. Aiki tells the story of Kunitoshi Joukyuu, a master of the martial art aikido, and the strongest person in the world. Unfortunately, he is also incredibly lazy and possesses very questionable morals. It is because of this that Joukyuu’s father seals away his abilities before dying, believing the current young man is unfit to possess such abilities. This story is Joukyuu’s journey to regain his abilities, which begins by training high school girls who find themselves in a school civil-war. And it only escalates from there. 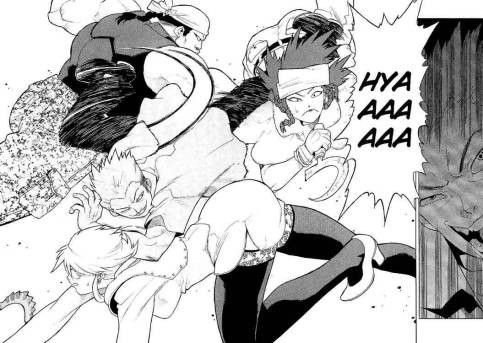 I really enjoyed the concept of this manga. It allowed our protagonist to start off extremely powerful and intelligent, but left him room to develop both his abilities and personality. In saying that, he doesn’t really change as a person. There are subtle alterations in the way he treats others, but a running gag of the manga is that he stays the same arrogant, lazy person. It’s meant to exceed the reader’s expectations, by having a slob be so powerful, but if you dislike Joukyuu (and there are many reasons why you would), it will be a struggle getting through Aiki. Luckily, I did find it funny, and was able to take this potential flaw and interpret it as attempted humour. I didn’t even need to try at times, because this manga can be genuinely funny. Between smart writing and palatable slapstick gags, I found myself giggling more than once during this 14 volume series.

While this manga was the ideal length for a shonen action series, long enough for both deep characterisation and world-building, I felt it went in circles quite a bit. Instead of one coherent story, it felt like Isutoshi just recycled the same story arc over and over again. Joukyuu trains a girl, fights evil, and pushes himself to remove the boundaries within his body. It was done well enough where I didn’t realise I was being fed the same story five times, but upon reflection the story did seem to go that way. Another reason it didn’t matter too much was that characters still developed linearly, and not in an episodic manner. This is really important, because in an episodic setting, characters will develop in one story arc, but that development will remain WITHIN that arc, and in the next chapter they will have seemingly forgot everything they learned. Aiki has characters continually building off of their development, which prevents the reader from having a frustratingly repetitive experience. 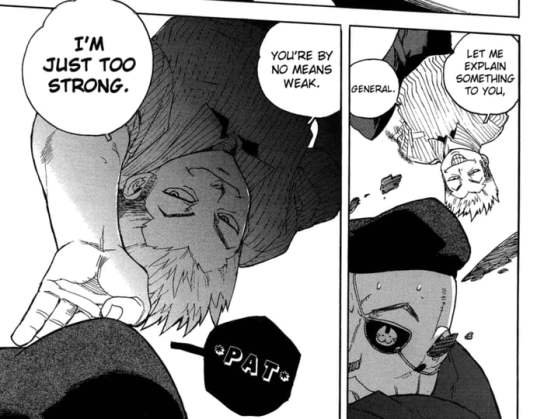 The biggest inconsistency within Aiki is its depiction of women. On a surface level, almost all the woman portrayed in the manga are objects, with big busts and a primary purpose of satisfying the protagonist. But slowly, personalities once paper-thin develop into complex qualities, and they are all depicted as strong, powerful people. Ninety percent of the world’s strongest fighters are women, and most give Joukyuu a run for his money. He acknowledges that their skill transcends gender, and always respects their ability by fighting with his all. This adds an extra element to what are already fantastic fight scenes. Female characters don’t win through male characters underestimating or going easy on them. They are genuinely more powerful than them. Unfortunately, Isutoshi’s history as an erotic artist contradicts the ultimate message he tries to portray. While he shies away from sex after the first volume, the underlying assumptions the art presents left me with an inconsistent feeling about the portrayal of women in this manga.

The art is good, but it only shines when portraying sensual events, which can be a double-edged sword. The consistent blank background panels and lazy character depiction means the reader sometimes wants more sensual scenes, as it’s the only time the artist actually applies himself. As previously mentioned, this is later phased out for action scenes, which can also be fantastic, but consistency is the key to world building! Aiki left me feeling a lot of things. Confusion, frustration, laughter and overall contentedness. While I acknowledge its flaws, I can also say that I enjoyed this manga. It was fun, lighthearted, but still had some depth that left the reader wanting more. I don’t know how empowering it is for women, or how much weight it holds as a substantial shonen manga, but its more favourable qualities meant that I had a positive experience with it.