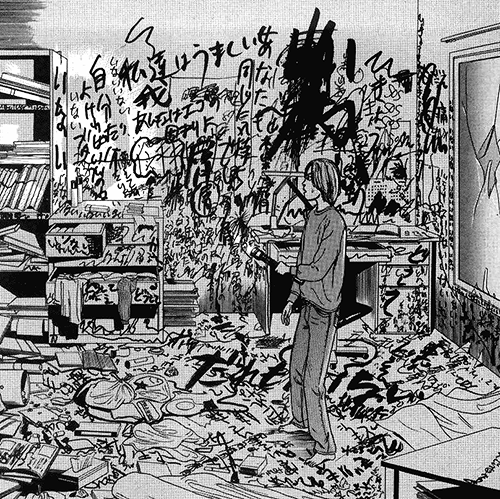 Story and art by Minetaro Mochizuki

Usually, I try to avoid comparing manga with each other when basing an opinion on them. I don’t like the idea of constructing my thoughts on a standalone piece by differentiating it with similar ones. But in this instance, it was incredibly hard to enjoy Zashiki Onna, as I had read so many manga like it before. While this may be considered the original “stalker manga”, I have to admit that its contemporaries do a better job of hooking and spooking their readers. This manga isn’t bad by any means, but it was definitely setting a bar instead of raising it.

Zashiki Onna follows college student Hiroshi Mori, who, one night bumps into a woman visiting his next-door neighbour. This large, creepy women shifts her attention from his neighbour to Hiroshi, and begins pursuing him at all times. Her obsession escalates, and the safety of others becomes jeopardised. What seemed like harmless actions soon become soaked in venom. When a story is structured this way, that is, structured around vagueness, characters are essential. Like I said, the horror genre is littered with manga like this, meaning all other aspects of the piece must possess unique qualities. For one, the antagonist, the cornerstone of Zashiki Onna just wasn’t… scary. Even in scenes where her aggression was displayed, she never came across as truly frightening. To be honest, I wasn’t even threatened by her. I think the main issue in her character design was predictability. There was never anything that made her more than a human stalker. Sure, she was unnaturally tough, and a very fast runner, but that made her more frustrating than frightening. She never escaped the bounds of expectations, which might make her scary in a realistic sense, but her actions never shocked me. Her origins where a source of intrigue, and I did enjoy finding out more about her, and gradually uncovering the mysteries within her. But I don’t go into a horror manga expecting to only enjoy its subtler plot points. I would read a manga that focuses on mystery if that was the purpose of my read. 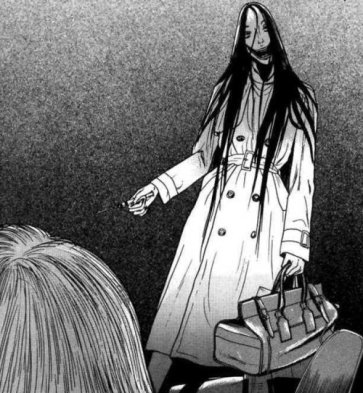 There also never felt like any stakes because the protagonist isn’t a likeable character. Sometimes the events seemed unfortunate for other characters, but never for him. Hiroshi is rude and cruel, and while I wouldn’t wish the events that played out to happen on anyone, even with qualities like that, I certainly wasn’t shaken up over it. The events that transpired should have given him an opportunity to grow, but he didn’t really. This manga finds itself in muddy water genre-wise, and these added elements are probably what led to its initial praise in the industry. It’s based in the horror genre but adds elements of mystery and tries to focus on world-building to attain a new form of storytelling. For example, some of its scenes take a different route than expected, prioritising setting construction over fearful moments. This isn’t necessarily a bad thing to do, but in an eleven chapter series with a cast of undeveloped characters, nothing will ever have the same level of impact as the creator wants it to. Underdeveloped characters in horror are usually because the piece focuses on other aspects of story, such as the antagonistic agent, but even she felt flat at times.

In saying that, it was refreshing to have characters that acted intelligently. The only scene that really shook me up was when our protagonist’s friend confronted the stalker, and a brutal fight ensued. In many ways I’d never experienced a scene like that before, and good pacing led to an unpredictable sequence. The art was the standout of this piece, and provided the only instances of scary moments. Despite my analysis on the stalker, the art always portrayed her outside my characterisation of her. It was unnerving, and I liked how the author used abstraction in typically realistic settings. Because of how tall she is, when the author depicts movements, sometimes they seem inhuman, and almost separate her from normal human characters. These scenes where what the manga needed consistently! The character could have been a source of terror for me, but an inconsistent presentation of her makes scarier moments merely a pleasant surprise. 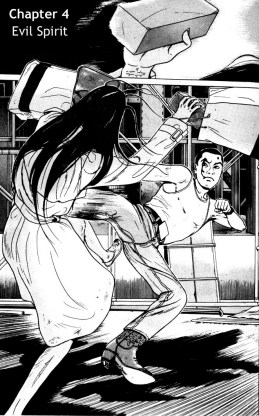 Zashiki Onna is a pioneering piece in the crazy stalker sub-genre of horror manga, and has many positive qualities. Its great art combined with consistent pacing creates a harrowing tale, published at a time when “stalking” still wasn’t a legitimate concern in Japan. Unfortunately, undeveloped characters and an inability to utilise art in an effective way led to lacklustre executions, hindering my experience with it.

If you enjoy this piece, I’d recommend “Ibitsu”, for a more-rounded horror experience.