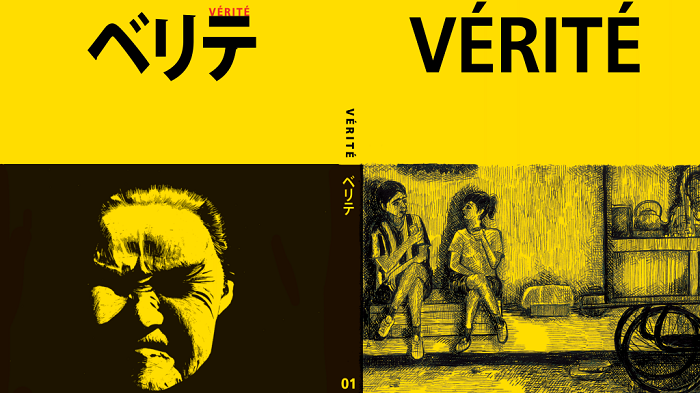 Within manga, the prolific work of the gekiga movement diversified the medium by bringing adult entertainment to the forefront of graphic novels. Identifying a need to separate from the dominant, childlike themes of mainstream manga, the gekiga discipline unionised cult followings attached to highly innovative pieces scattered along the fringes. Gradually, what was just an emphasis on mature themes became a new aesthetic, one derived from challenging characters, innovative artistry and unconventional narrative structure. However, gekiga has been seen as a movement situated firmly in the past. Its historical significance, while increasing in popularity amongst western publishers, has always been linked to the time of early post-war Japan. Through the inclusion of alternative manga artists, contemporary comic creators, and a new cultural setting, Vérité provides a comic anthology that spiritually succeeds the gekiga magazines before it.

Much like the ideas explored in the gekiga movement, Vérité, the initiative of Comix India and editor Bharath Murthy, attempts to tackle pervasive social issues in contemporary society. It’s other role, however, is providing an exploration of artistry from a country relatively unrepresented in both our western consciousness as well as the wider comic community. With two volumes published at the time of writing, the first volume of Vérité does a great job of introducing readers unaccustomed to India to this new landscape through stories weaved within its environment. Anpu Varkey’s Nightswimming and Simon Lamouret’s The Alcazar hone in so tightly on the themes of sexuality and financial hardships that you almost forget they’re set in foreign locations. But when you go back to re-read them, the little intricacies of Indian life are highly prevalent to the complications within each story.

It’s the linking to a new social landscape that makes these volumes so unique, and provides a new perspective on many highly relatable issues. Lamouret’s aforementioned piece conveys the harsh realities of economic struggle, a classist topic that transcends ethnicity, but shown from the relatively unknown perspective of a young Indian labourer. Shaunak Samvatsar’s Research Ramblings and Bharath Murthy’s P1. do the needful give insight into the struggles of art education not only within our preconceived ideas of schooling, but set within the social and political constraints of each character’s setting. While the Indian comics may be rooted in their native land, the themes present within them are generalisable to all cultures.

In terms of its direct links to gekiga, editor Mitsuhiro Asakawa plays a pivotal role in keeping Vérité’s atmosphere authentic. His experience as editor of alternative manga magazines Garo and Ax allows for the insightful selection of evocative and challenging pieces from a figure embedded in the movement. This makes Vérité, soaked in a similar philosophy, a direct relative of these projects. Alongside its symbolic links to gekiga, the inclusion of manga from the likes of Tadao Tsuge, Seiichi Hayashi, Nazuna Saito and Susumu Katsumata keep the gekiga content alive. Ironically, Vérité provides an opportunity for many of these pieces to be published in English for the first time, a similar position to their Indian contemporaries.

For those unfamiliar with some international comics, these volumes are unconsciously legitimised by the inclusion of notable manga artists, some of who have created pieces exploring Indian life also. Yukichi Yamamatsu’s The Rickshwala’s shop documents the life Khajim, a store owner in Delhi, whose run ins with the orphans of New Delhi slowly change his perspective on living. Through familiar artistic direction and narrative style, the Indian landscape is further explored in gekiga fashion, cementing it as a place of comic significance. However, the inclusion of classic gekiga is not only to familiarise readers with Indian culture, but to emphasise similarities between the Indian comics collected and their Japanese counterparts.

It is not just through class struggles and political instability that these Indian artists have pulled on the heartstrings of the gekiga faithful. It’s also through fluid, simple, but often surrealist imagery that these stories resonate so strongly with manga enthusiasts. One may read Susumu Katsumata’s Book of Straw in the same vein as Bharath Murthy’s P1. do the needful. Both explore their respective issues through the use of animal symbols, cultural isms and introspective narration. The way in which the characters and environment blur into one produces a cohesive reading experience, one that allows the avant-garde imagery to seep into stories. While evident in Volume 1’s The Student by Biboswan Bose, it is in the second volume, significantly larger than its predecessor, where abstraction takes centre stage.

The volume opens with Sunil Nampu’s St. John Abraham, a 40 page exploration of the government-owned liquor stores of India, and their monopoly on the alcohol industry. Its hashed, non-linear dialogue only furthers the intrigue produced by its sketchy aesthetic. Moohtown by Anpu Varkey solidifies the stylistic direction of this volume, with an emotionally charged piece documenting one girl’s reflection from her tenth floor balcony. While her art remains clear in its storytelling, the narrator’s feelings begin to manifest in her environment, creating multiple highly confronting landscapes. It can only be assumed that these pieces, which may be challenging for a mainstream audience, will continue to find a home at Vérité, where their aesthetic and narrative oddities can be truly appreciated.

The second volume brings with it the inclusion of a new segment, ‘literature in comics’, in which Indian literature is adapted into comic form. The classical story Phoren Soup by Bhupen Khakhar (recreated by Lokesh Khodke) not only furthers the impact of Indian culture on comics, but provides a story in which the east and west are inexplicably linked. The sexual nature of these characters, agitated by a ‘phoren’ (foreign) object, explores a link between post-colonial India and the contemporary ideas (represented as soap) ascribed to the west. We’re also provided with an example of the adaptive potential within the manga medium. While a lesser explored avenue of the medium, the Citi Exhibition of Manga, held this year (2019) at the British Museum, used Katsuhiro Ōtomo’s rendition of Alice in Wonderland to introduce readers to manga. A similar feeling comes when reading Khodke’s adaptation, in which the translation between mediums has allowed for a unique reimagining only possible with the use of comics.

Art historian and Vérité editorial adviser Ryan Holmberg has also contributed some of his own works to the collection, with an essay on gekiga artistry in volume 1, and an interview with Seiichi Hayashi, a prolific figure in the gekiga movement, in volume 2. And this contributor diversity extends to multiple international authors who have also provided their own stories for publication. What’s ironic is that, even though the audience may be unaware of Indian comics before Vérité, pieces like The Alcazar, created by French graphic novelist Simon Lamouret and American Nick Tobier’s No One Knows show that India has long since been in the consciousness of comic creators.

While the structure of the Vérité anthology mirrors a volume from the manga rental industry, an industry that many alternative manga artists would have been apart of last century, this new project provides a holistic experience of the medium. There are the iconic Japanese movements portrayed on the gekiga side, the contemporary, fresh stories from the Indian side, and scattered in between are various elements of comic academia. Not only has an authentic avenue for adult comics been created (a phrase adeptly printed on the top of each Vérité cover), but a new, hybrid aesthetic has been established, one that is as insightful as it is entertaining.