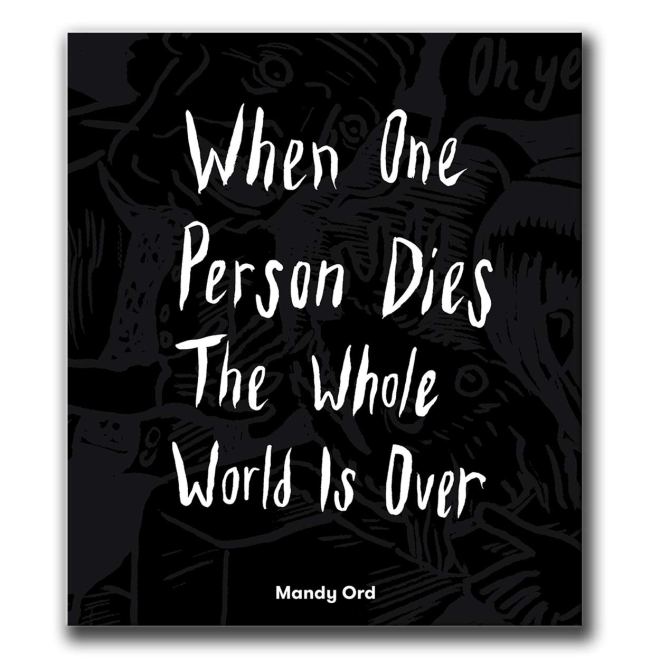 Review: When One Person Dies The Whole World Is Over

Story and art by Mandy Ord

In terms of popularity, vloggers, and the depiction of modern living, has become the most popular form of content consumed on the internet. These figures, often referred to as social media influencers, are able to simultaneously emit authenticity, while providing an idealised concept of living. But what if they were to truly portray what it was like to live? Not romanticised notions of struggling, but dirty, dry visions of repetition and existential reflection? Enter Mandy Ord’s When One Person Dies the Whole World is Over. We are given an opportunity to see how others truly live, even if the mundanities depicted remain… mundane.

Ord’s title documents a year of her life, alongside her wife of 20 years, and their dog Lou. Each day has a dedicated four panels, usually beginning with a commute to work and ending in bed. Working within the limitations of a four-panel story, each narration points out the subtler, overlooked aspects of living, while never reflecting on them. No value is ascribed to any of these events; walks with Lou and bad days at work often balancing out in an existential malaise. The detached form of storytelling invites the reader into Ord’s mindset; this piece is for her just as much as it is for us. While she may breeze through her days in a linear fashion, these entries serve as a reminder that, even when everything seems arduous, we can step back, reflect, and eventually pick out value (if we try) from even the smallest of things.

As Mandy spends most of her time working, drawing or exhausted, there is a large degree of repetition in her lifestyle. It’s inspiring witnessing the grind of a creator, struggling with multiple jobs in order to pursue their passion. However, with no dramatisation or underlying narrative, the drifting sensation the reader experiences can become monotonous.

But here’s where Ord utilises an inverted form of storytelling which in itself is fascinating; when touching on more serious elements of living; potential illnesses, important conversations or big life decisions, they are given no more than a mention. Retaining the pace of each four panel day, all meaning is drained from these seemingly important instances. Much like how mundanities may be removed from a story to increase excitement, Ord purposefully removes the meaning of these moments to emphasise the turbulence of everyday life.

Ironically, it was these instances that added a source of enjoyment to the piece. The sagas of Mandy’s illnesses provided a continuity that made the comic more interesting at times, and broke the monotonous cycle the reader could find themselves in. The consistent rhythm of this piece meant every page had the same flow, which was sometimes too dreary. Other times I was truly immersed in her life, not realising a month of the narrative had gone by. This could be attributed to the mini sagas within a sea of mundane.

The art in this piece also prevented the reader from being disinterested. The almost inhuman qualities that Ord ascribes to herself creates a sense of otherness; the way we are moulded by external stressors plays a large way in how we perceive our world.

To be so unabashedly honest about how one lives, even if that means just portraying the same notions over and over, is the basis for a genuine exploration of the human condition. Ord’s style of storytelling forces the reader to stop and dissect the elements of life we have a tendency to overlook, and even find some meaning in them. In saying that, if one can’t even stand the mundanity in their own life, I can understand how it would be hard to sit through a years worth of entries depicting just that.