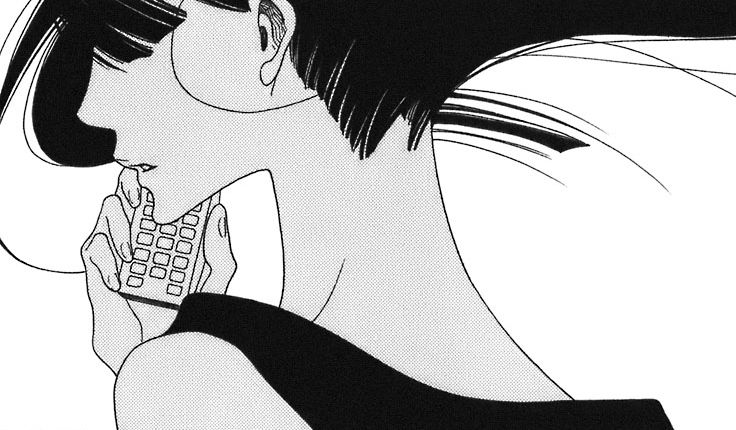 Story and art by Asumiko Nakamura

Length: Originally 2 Volumes (Combined into one for western release)

Utsubora was a disappointment for me. It’s not the ideal way to set up a review, but it’s honestly how I would some up my experience with this piece. I was expecting a thought out, intelligently written manga exploring the dark imaginings of a writer and the twisted world he creates for himself. Unfortunately, all that was provided was an uninspired story, sprinkled with convoluted babble for the sake of mimicking other profound thriller pieces. The art was an admirable departure from the norm, and if left on its own to create tension, may have led to a more effective manga.

The story presented in this piece rests on a lot of popular themes present in contemporary Japanese literature. Many play out in a similar fashion, beginning with an indifferent and often detached male figure struggling with issues exacerbated by the society he lives in, when suddenly a young, attractive girl appears to challenge all these societal norms, most of which are projected through surreal, and often sensual scenes. In the end, the female lead vanishes, and the male must either adopt her unusual way of living, or see their interaction as nothing more a curious set of incidents, with the latter usually occurring.

While it doesn’t play out exactly like this, Utsubora doesn’t compel me with its story like some of its counterparts do. Utsubora follows Jin Mizorogi, a veteran writer who has returned to his craft after a long hiatus. While publishing his newly successful piece “Utsubora”, he receives a call from the police, asking him to identify the body of a girl he once knew. As he enters the hospital, he encounters a girl identical to Aki Fujino, who a few days earlier had jumped off a building. As the reader, we attempt to uncover Aki’s death, her relationship with Jin, and what links it has to his newest title.

While the works of Haruki Murakami and Yoko Ogawa use language to describe both mundane and surreal scenes, allowing fiction to bleed into reality, Nakamura uses writing to create a very linear story, with the only challenging plot points being expressed through art. I could tell when something important was going to happen or when I would be reading trivialities based on the scene’s art direction, which was a disappointing pattern to spot. When I say trivialities, I don’t necessarily mean mundanities. By trivialities I mean that most of these scenes add layers of information to the story that make it feel bloated and confusing. Leaving key information unexplained would be appropriate for what this manga was trying to portray, however, there was no need to replace that information with unimportant babble. Minimalism is key to making these mysteries intriguing. If you subsidies that information for scenes with the same amount of content but no relevancy, you instill confusion, and too much confusion makes a read unrewarding.

The art style of Utsubora was a much-needed separation from the thriller X mystery the piece was trying to explore through writing. Its lanky, gothic style made each individual look more sinister, but more importantly, like there was substantial depth to them. I don’t need to be told a character is hiding something, I need to feel it.  The dark backdrops produce an uneasy feeling in the reader, and there were multiple instances where the surreal sensuality bled into reality. There were multiple explicit scenes in this manga, which for the most part I enjoyed. They were the only instances where anything (that I thought was) meaningful occurred, and balanced surreal imagery with mild confusion. There were far too many instances where this piece’s writing and pacing made the manga too complex to understand, but in the scenes where art was the focus, I felt more secure about extracting a meaningful story.

Ultimately, the manga wants to do two things; provide shocking twists for the reader to experience, but also have a story convoluted enough where the reader has no concrete answers to grasp onto. However, if the reader is too confused to know what’s going on, how can we then be shocked when something we didn’t even know could happen, happens? I experienced reveals where it seemed like I should be saying ‘ah ha’, but I was always two steps behind understanding why it happened. And because the author never reveals enough information to entice the reader, it really is your prerogative whether you decide to continue.

Utsbuora is a simple, linear story that cloaks itself in abstract art in order to seem more profound than I think it actually is. In between this story, Nakamura spreads convoluted dribble in order to really hit home that this is a piece that is meant to make you think. And it does. But probably not in the way the author intended. The story wasn’t unique, but a marriage between its linear aspects and artistry could have provided a more compelling read, if the focus had steered away from the writing and onto the more complimentary aspects of this piece.