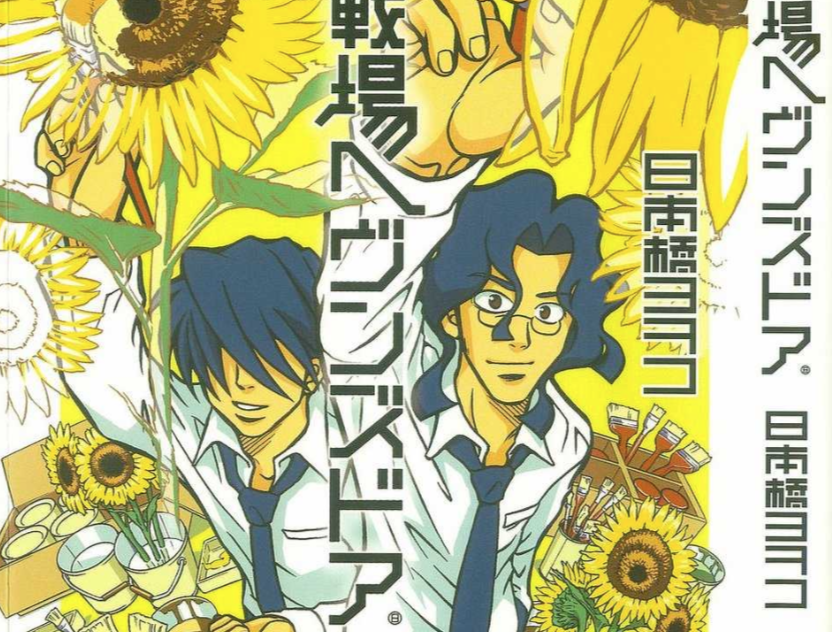 Story and art by Yoko Nihonbashi

To preface this review, this is one of my highlight readings of the year. It has refreshed me, it has ignited a passion that was beginning to dwindle. G Senjou Heaven’s Door is about passion. It’s about how passion can kill you. It’s about how talent is not just based on skill, but other subtler elements about a person both mentally and physically. I believe creator Yoko Nihonbashi is channeling these overwhelming feelings through his creations. The way the characters live and die for manga can be seen, on one level, as sadistic and demented, but on another as poetic and something that resonated strongly with me. Not many people see talent, and more importantly love as a burden. This manga explores how it can be.

This manga is about two young boys, Machizo and Tetsuo, who befriend each-other during school and decide to climb up the rungs of the manga industry together. Tetsuo’s favourite mangaka, unbeknownst to him, is Machizo’s father, who he resents for creating a shadow he is now enveloped in. The strongest aspect of G Senjou Heaven’s Door was the characterisation. There have been many manga series regarding young creators entering the manga industry, and without a unique set of characters they can all just blend into one. Nihonbashi had no issue developing his characters meaningfully from the first panel, and I feel like I’ve had so much time with them. It genuinely feels like I’ve spent 80 chapters with them instead of 18. That may also be due to how immersive this manga was, as losing track of time meant losing track of length. When I look back, so much happened, but it never felt like it was rushed or that the entire manga was plot progression. There was no frantic, inauthentic explanations that shorter manga love throwing at readers, but instead great characterisation through a series of realistic decisions, actions and struggles that the reader can relate to. Most importantly, the emotions expressed by the characters were real, not just emotional tools used by the author. 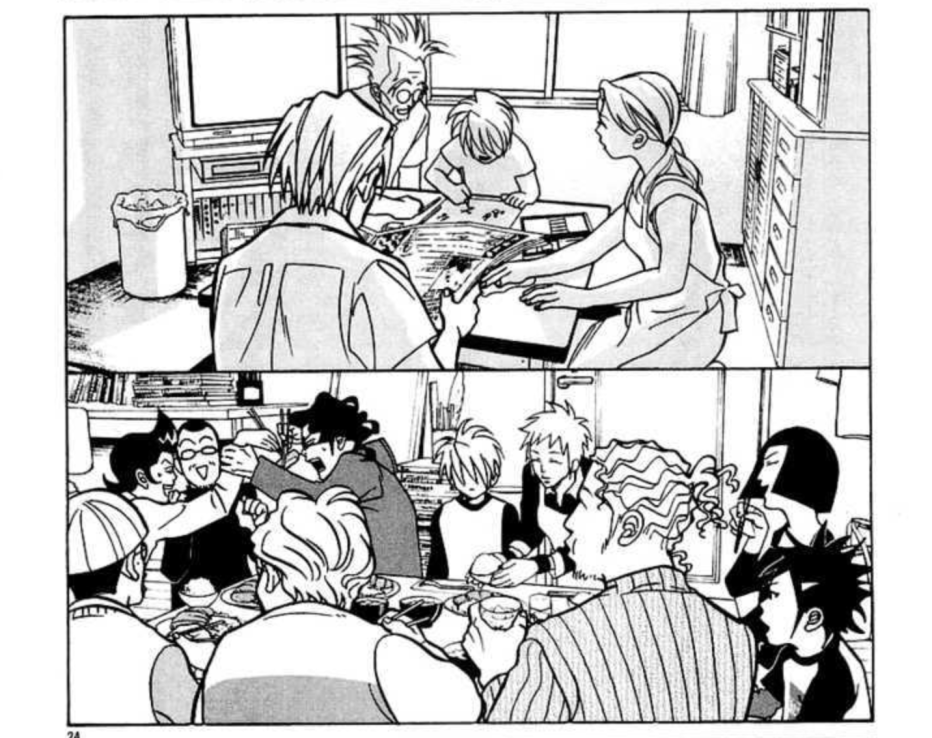 From the first instance I was placed in an emotional setting, I knew these feelings were genuine, and came directly from the author himself. The way I knew was simple; there were no vague complications, no characters telling me how they feel. These emotional scenes were in very specific circumstances and due to things I had never experienced first hand. But the feelings they conveyed, and the way they were conveyed, through introversion, lashing out at others and complete commitment to work… everyone’s experienced something like that. Slowly, the series did become more dramatic, and there were certain eye-rolling moments, but they were salvageable only be the feelings they expressed to the reader.

Another really interesting aspect of this manga was the way it dealt with a term loaded with shallow terminology – “talent”. Manga revolving around mangaka usually portray a character who is either incredibly talented “naturally” or ends up becoming amazing through extreme practice and dedication. This is a very “shonen” motif, and it’s a great way to pump up and inspire readers, but it’s far from realistic. This manga doesn’t shy away from darker themes, and in the same sense doesn’t shy away from much more important facets that make up talent, including mental health, persistence and a support network. There are some characters who are talented, but don’t have the mental stability to be artists, and pursue their love for the industry in other productive ways. This aspect of G Senjou Heaven’s Door is what made it so inspiring. It wasn’t just about a couple of high school boys that had 24/7 to dedicate to manga. It depicted full time workers, mothers and other characters whose primary source of income couldn’t be from manga at their level. But they persist nonetheless, because nothing will hinder them, mentally or physically, from being mangaka, irrelevant of their success. 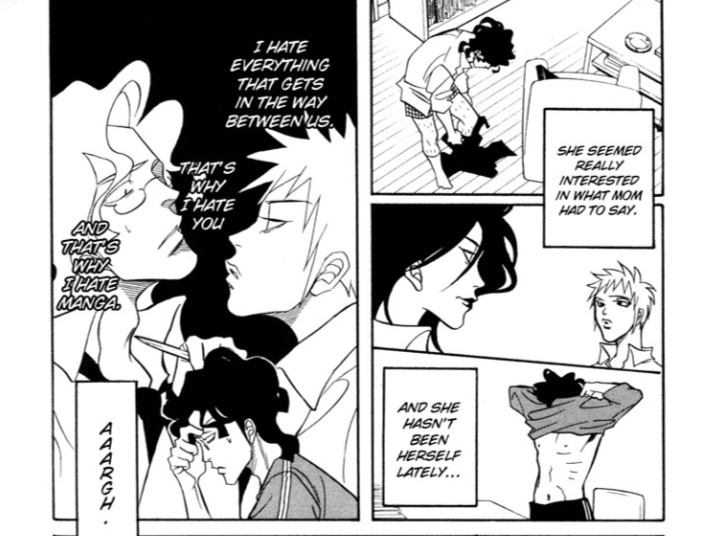 The intense passion depicted in this manga is further emphasised through extreme moments and extremely intelligent storytelling. Nihonbashi makes constant associations between other highly emotional, and sometimes traumatic events in the character’s lives e.g. death, divorce, self harm, attaching the same level of emotions the character has to the industry. The protagonists react to manga so emotionally, and all these other feelings that are linked to manga effectively transform the medium into something in-between a coping mechanism and a new reality. In one sense, that’s what makes this one of the best manga about manga – it’s not about progressing through the industry, it’s about the people at the bottom and how their love for the medium inspires them to struggle on.

The art was well done, though it was definitely something I slowly got used to. When you flick through it, the art looks normal enough, but when you begin reading it, it can look a bit… off. And then you look at it again and it’s fine, and then it’s… off again. What made it semi-disorienting was how it was (only) slightly different from the conventional manga art, with more rounded characters and a reduced sharpness you’d expect out of a contemporary series of this genre. The series also had limited background panels, so it made it hard to grasp where I was or the level of realism that was intended. As I said, it was something I eventually got used to, and a more rounded art style allowed for more exaggerated movements and reactions, which added to its elements of humour. 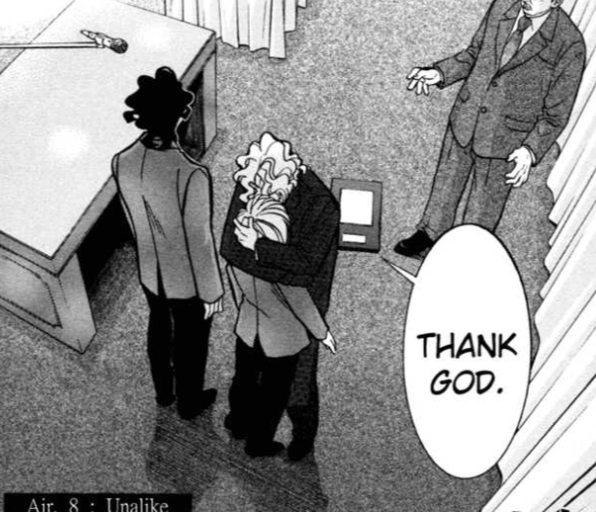 A criticism that I found consistent with reviewers about this manga was how much importance is placed on manga. The medium is great, but many people had a hard time empathising with characters that were so obsessed with it. In contrast, it had the complete opposite effect on me. That was the whole point! It wasn’t as lighthearted as ‘Bakuman’, where the protagonists love manga and want to be the best. This story is about characters where… manga is everything. Some people sacrifice schooling over it, some their relationships, for some, their pursuit of an occupation in the manga industry is literally killing them. Yet, they can’t stop, and they don’t want to. Whether it was due to psychological issues, fond memories or lack of direction, these characters attached their beings to the world of manga, and to see how they lived, often in unhealthy or at least un-ideal ways, was actually really inspiring for me. Not to say that I would want to live like that, but to have something so important to you that you would be content dying while doing it… it is truly special.

The last chapter was a huge disappointment, and its inclusion really hindered this piece for me. It was one of those tacky ‘ten years into the future’ chapters that didn’t really add any substance to our characters – it had no implication on the rest of the series (because there wasn’t any left) and felt very forced. I’m not sure if it was because this manga was cancelled, and the author was planning on having that be the ending, but it felt out of place and messed up the pacing of this piece. Not only that, but I actually loved this piece as a 3 volume series, and felt it didn’t need any more expanding. If it had finished one chapter before it would have been more powerful and more efficient at reaffirming core themes in the series. It also would have been a satisfying way to end, which I suspect the actual last chapter was trying to do in the first place. 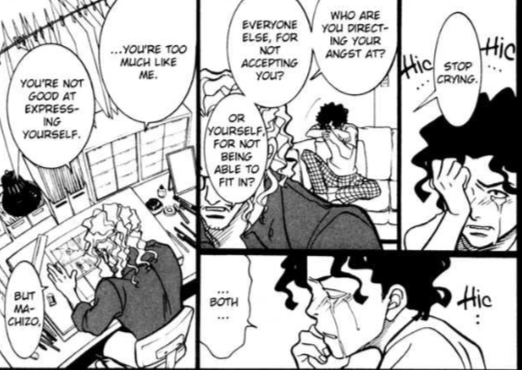 G Senjou Heaven’s Door is an exceptional piece of manga that can be both highly emotional, highly immersive and highly inspiring. A slightly conceptual art-style and over dramatisation cannot be overlooked at times, but that’s the same with the underlying passion used to create it. I really resonated with the characters, and the way their love constantly impeded on their happiness was both poetic and heartbreaking. I urge all readers of this genre to delve into this incredibly morbid telling of the lower rungs in the manga industry. It’s very short which is always a positive, but even if it was three times the length, it is more than worth your time.