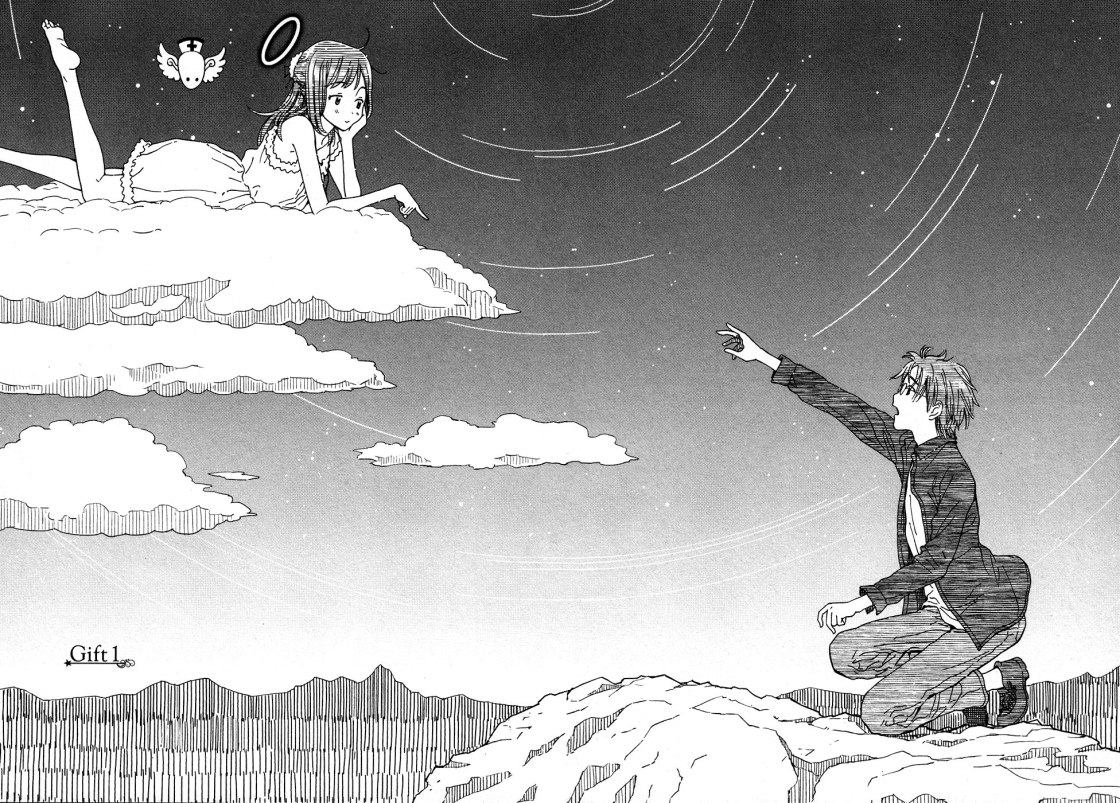 The Gift of the Magi Review

*** I’d like to start this piece by reminding everyone that this manga is 6 chapters long. It will take you less than an hour to read, and I highly recommend you do so. I’ll be here waiting patiently until you’re done…

Magi no Okurimono is heartbreaking, to put it simply. Heartbreak is the most appropriate word to describe my experience. Its highs were bitter sweet, while its lows were soul sucking. This manga made its readers bleed with empathy through its effective creation of genuine characters. However, the story structure and some plot points held Magi no Okurimono back from being truly exceptional.

This manga follows Daichi, a young man travelling through a mountainous region of Japan in order to reach an observatory, resting at its peak. Daichi had spent his childhood with his next door neighbour Akari. They both had opposite interests, with Daichi focusing on geology (the ground), while Akari revelled in space (the sky). After years of silence, Daichi finally confesses his love to Akari, and she accepts.

Now 24, we learn that on this day 5 years prior, Akari passed away in a tragic accident. Recently, Daichi feels as though he’s forgetting her. So he takes a vacation and travels from the city of Tokyo back to his suburban home-town, in an attempt to attain his fond memories of love once more. Unbeknownst to Daichi at the time, his lover, in the spirit world, is doing everything she can to hinder his progression to the observatory. Akari believes that, heartbreakingly, the only way for Daichi to move on in life is to forget about her, and selflessly, tries to depart from his mind.

This is a piece of genuine tragedy. In media, you find stories where characters are placed in unfortunate circumstances, with the intention being to obtain the audience’s empathy. Empathy is an important aspect of relationship building, and to evoke it through harsh realities is an effective tool in story telling. In my opinion, you will never feel for characters as much as our protagonists. They’re both genuinely good people. Not in an artificial sense, they’re not perfect, but they are both likeable and possess actual passion. This passion, taking the form of unwavering love, effectively transcends reality. It’s the type of love that makes you say out loud “I want that.”

While it may prevent him from moving on with his life, Daichi vows to never forget Akari, in an attempt to keep her essence alive. Akari, knowing it will take him away from her forever, tries her hardest to set Daichi’s life on a path moving forward. They never complain or have angsty moments; they’ve been dealt an unfair hand, yet all they are concerned about is using it to express their love to one another, in whatever way they can. It’s absolutely devastating to read.

The manga’s structure relies on flashbacks. We start in the present, with our protagonist at the bottom of the mountain looking up at the observatory. We rarely see Daichi hike up the mountain, instead, each new landmark triggers a memory in him. Due to this, most of the plot progression is done through flashbacks, with character development strengthened through memories, such as how the protagonists met, got together, ect. While the flashback themselves were well done, I can’t say the same for the bits in between. Nothing really important, nor meaningful happened during the segments in the present (until the very end). Nothing, when done properly, can be GOOD. But these scenes contained only explanations of what the reader already knew. It wasn’t that bad, but it definitely made the flashback structure more repetitive than it needed to be. This is where Magi no Okurimono’s length plays as an advantage, as it’s so short that it never became annoying, but the manga’s execution of this technique could have been more effective.

How the author decided to portray Akari in the present, however, was rather interesting. Instead of just watching over Daichi from heaven, Yoshizuki created his own version of the spirit world. In it, a spirit is able to accumulate wealth (much like when they were alive) by having their name said aloud in the world of the living. As Daichi has been in denial for so long about his lover’s passing, he’s said her name so often that she possesses a small fortune. This was a very effective method of materialising Daichi’s love. It’s easy to write a line where a character says “Daichi talked about you non-stop for years.” But to see a giant bowl full of riches gives the reader a physical representation of his love, and the lengths he would go to keep her within him. 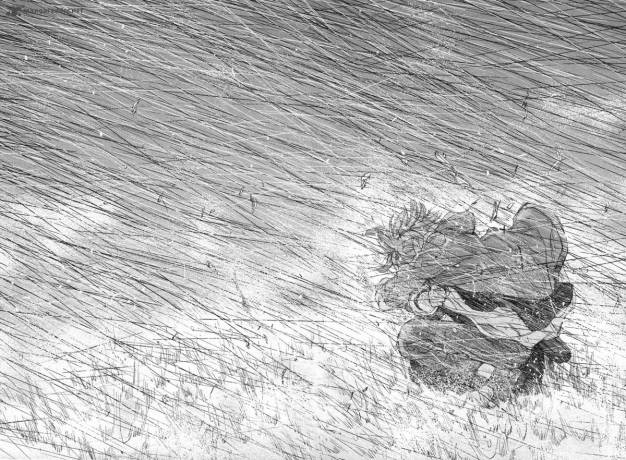 Akari then uses this currency to affect the world of the living, including the creation of mud slides, storms and hail to stop Daichi from making it to the observatory. This concept wasn’t only applied to Akari either. Using the example of Albert Einstein, a famous figure that everyone references, it’s easy to accumulate wealth in the spirit world (even for those living in infamy). While I really enjoyed this fresh take on the sprit world, and it was done well, it just felt so… out of place. The angel that talks to Akari acts as comic relief, breaking up an already emotionally draining story, but this could have been easily done with a more plain afterlife. Now, I’m not saying that this took away much from the manga, but it felt like its own story, or something worthy of its own series. If the point of the manga is to have to lovers desperately trying to contact each other while on different plains of existence, don’t make the afterlife so interesting! It does add extra depth, but it for me it lessens the strength of their relationship, by focusing too much on an unrelated concept. Nonetheless, it was done well enough that I didn’t hate it, but to say it was a tonal shift is to put it lightly.

The art was elegant and effective, portraying both nostalgia, frustration and loving despair with haunting accuracy. The characters were emotive, and Yoshizuki’s ability to portray complex movements was smooth and accurate. The ending was exceptional, and certain plot points made the manga even more meaningful. Constantly describing the young man as a rock with his eyes on the ground, and the young girl with her head in the clouds created imagery startling due to both their personalities and outcomes in life. She would always be one step ahead of him, moving forward quickly, yet, he would always be grounded, ready to pick her up whenever she tripped. I’ve kept my analysis on the themes very limited, as it requires spoiling the manga, but as I mentioned before, the WHOLE thing is 6 chapters. 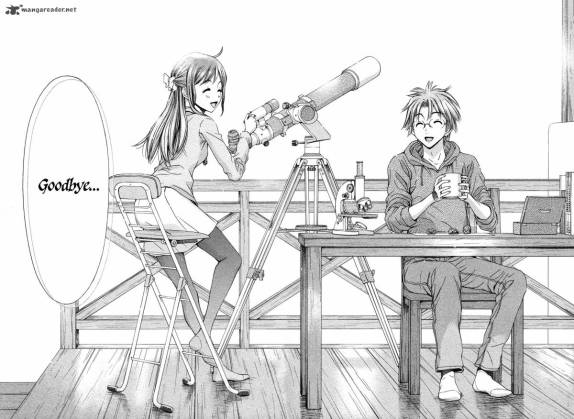 Magi no Okurimono is an example of how great storytelling will always trump length. You don’t need a 300+ manga to feel engrossed, captivated, invested. All you need are simple characters, whose inherent humanness captivates you alone. They don’t have all the answers to their situation, because no one does. They don’t try to tell you how to live your life, or make the distinction between right or wrong. At the end of the day, all they are doing is trying. Trying to live after what they’ve been through. Trying to reach the one that they love. Trying to attain happiness. While I felt that some parts were underdeveloped and others overdeveloped, the inconsistencies were never enough to really harm this piece, and its execution was so fantastic I often found myself forgetting it had flaws. There is no reason why you shouldn’t read this piece.